After 7 years of planning (dog years that is), our favorite streaming service has released DogFlix, a new subscription service designed to entertain your pooch.

Borrowing from the already popular slogan “Netflix and chill”, the new slogan is “DogFlix and drool”. It is expected to be a smash hit for both small and large dogs alike. Of course, all programs are filmed and edited to minimize the use of red, and are all guaranteed howl-free (except for the horror channel). 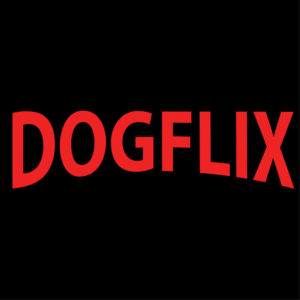 The service will launch with many high quality programs for your dog to enjoy, including food programs called “Begging for Scraps 101”, which will aim to give tips on how to milk their owners for the tastiest scraps using underhanded techniques like puppy-eyes, and the sit-up-and-beg pose, “TreatWatchers: Eat treats and watch your weight”, and “A dogs dinner date” where dogs will try to impress their fellow canines with their tastiest packets of wet food.

After all that food, your dog may need to burn off some calories, so add these exercise related series’s to your watch list: “50 Top Walks to take your Human so they dont get too Tired”, and “Swimming: If you cant doggy-paddle, you’re doing it wrong”.

Get the grey matter working with quiz shows “Who Woofs to be a Millionaire?” and of course “Masterhound”.

All dogs love action films, so why not watch the 007 spy thriller “Russel, Jack Russel: Dogbones Are Forever”, as well as the sequels “Octodoggy” and  1999’s “The Backyard is not Enough”.

For the dogs who love action and sci-fi, the full box set of “Dog Wars” is available: The films in order are “A New Cat”, “The Cat Strikes Back”, “Return of the Cat”, “The Cat Menace”, “Attack of the Cats”, “Revenge of the Cats”, “The Cat Awakens” and “The Last Cat”. The set does not include the newest release “The Rise of the Dogwalker”.

On the lighter side, try some RomComs, including “You’ve Got Tail”, “27 Harnesses”, and Drew Barrymore’s “Never Been Sniffed”.

If your dog isn’t afraid of the dark, switch over to some of the horror on offer which will keep your dog on the edge-of-the-bed. Some offerings include “Werewolf”, also a re-make of Wes Craven’s 1996 classic “Howl”, and “The Basset Hound of the Baskervilles”. The programs are suitable for dogs over the age of 3 and only recommended for viewing by certain tougher dogs such as Mastiffs, Rottweilers, and the almighty Dachshunds.

If your dog is more into comedy, look out for “The Big Dog Theory” where Sheldon Pooper and his friends are socially awkward dog genius’s trying to get the the bottom of the physics of why their ball sometimes just doesn’t bounce the way they were expecting, while trying to befriend the blond bitch (she’s a Poodle) next door.

Please note this is a parody article and should not be taken seriously…just in case you were wondering.